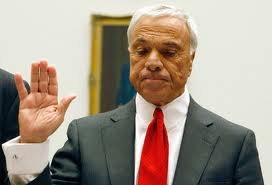 In the aftermath of the 2008 financial crisis many people are left asking whose fault is it? Some are turning to the former Countrywide’s former CEO of Angelo Mozilo. The company was the formerly known the nation’s largest mortgage lender and lent out more than $408 million worth of loans in 2007. Countrywide instituted a program known as “Hustle” where they sold Fannie Mae and Freddie Mac many underwritten mortgages with the knowledge that they were worthless. Because people could not pay what they owed many houses foreclosed and the housing market was sent in a downward spiral. Mozilo is also being charged with insider trading for selling his company’s stock right before it exploded.

Countrywide was bought in July of 2008 by Bank of America for a $4 million dollars (which Mozilo also profited from). A decision that has been considered as a mistake by several BoA executives. Since the sale,Bank of America has been slapped with fines including a $1.27 billion in July of 2014 for thousands of defective mortgages sold by Countrywide. In 2010, Bank of America also agreed to pay some of Mozilo’s $67.5 million settlement with the U.S. Securities exchange Commission for his role in deceiving investors about Countrywide’s health and risk-taking. Mozilo’s lawyers claim that a civil fraud case replicate the actions taken by the SEC. Given that Bank of America is footing a majority of the SEC lawsuit, Mozilo is paying only a fraction (compared to the $500 million he made prior to the crisis). In addition, Mozilo has not taken any fault for his actions.

According to the New York Times, federal prosecutors have dropped the criminal investigation of Mozilo and have now moved to not file a civil fraud case against him. This decision was made after a joint two year investigation conducted by both the Department of Justice and prosecutors in Los Angeles. This decision comes amongst criticism for not holding high-ranking executives for the mortgage meltdown.

The only executive of a major U.S. mortgage lender found responsible for their part of the financial crisis was overturned last month. Also a former countrywide executive, Rebecca Mairone, was relieved from a $1 million fine. According the New York Times, the panel responsible for overturning the verdict argued that while, “Countrywide may have sold flawed mortgages to two government-sponsored mortgage firms, there was insufficient evidence that the firm and Mairone had engaged in any deliberate deception”. This has left us with a grand total of 0 executives who have claimed responsibility of the mortgage crisis.